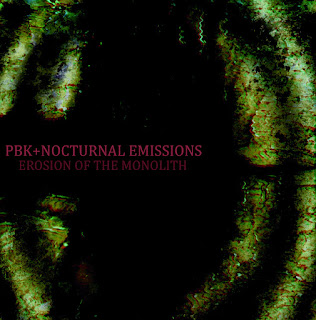 The pre-order for the PBK + Nocturnal Emissions vinyl LP, "Erosion Of The Monolith" is live now and the LP's should be shipping within the next couple of weeks.

Phillip B. Klingler: "The title alludes to a natural, inevitable process of disintegration, but the reference in the current time/space is towards the erosion of monolithic social structures that are anti-evolutionary and immoral. The composition titles are derived from such diverse sources as Edgar Rice Burroughs' Venus and Pellucidar pulps from the 1920's/30's, Native American mythology, and World War II history. I set out to make a record that was something of a tribute to Nigel's fascinating late-80's releases, "Spritflesh", "Stoneface", and "Invocation of the Beast Gods", something that would sit well next to those works."