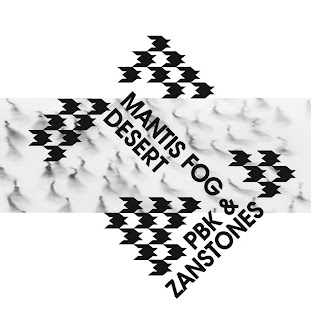 Here's the cover for the new PBK/Zanstones release due out on Monochrome Vision (Russia) before the end of the year. I'm very pleased to announce this as Zan Hoffman and I have been friends since the late 80's.

Description: Zan Hoffman has been doing extensive experimental sound works under the Zanstones name and international collaborations under a variety of names since 1984. He has released hundreds of works on his own label and collaborated with many experimental musicians from around the globe.

Hoffman and Phillip B. Klingler, aka PBK, are longtime friends/collaborators, their co-projects go back to the late 80's. Hoffman has often used PBK's sound sources and has even created several PBK tributes such as "How Doth The PBK?" and "The Man Who Would PBKing".

In 2010, Hoffman created new sound sources for PBK using only acoustic instruments, in this case an accordion and a zither, to create drones which PBK added to and mixed using atmospheric noises and spacey, psychedelic textures. This new work is titled "Mantis Fog Desert".

In addition to the five collaborative tracks, Klingler and Hoffman have each contributed solo tracks as a correlation for the listener to discover what each artist brought to this project.