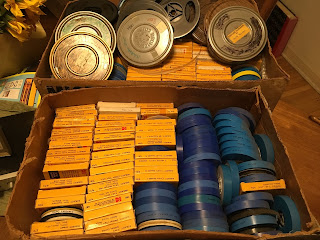 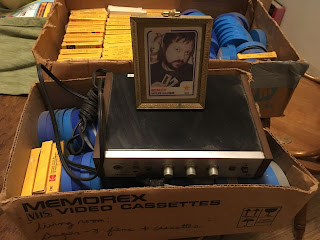 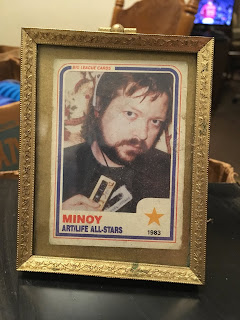 David Herrera, who bought these films at Minóy's estate sale, has graciously donated the entire collection (250+ reels) to the archive. Some of the reels are of family trips in the mid 70's, but most are experimental things Minóy did during his college and post-college years and overlap into the first several years when he began making audio art. No films are found dated after 1984, until he resumed activities very minimally in 1989. Although Stuart Haas, Minóy's partner, sent me all of the master audio tapes he did not mention possession of the film collection otherwise I would have asked for that as well. So it was really a surprise and a miracle that Mr. Herrera contacted me after buying the lot! These are invaluable to the archive and we now have enough media to begin assembling the documentary film. Also included in the collection: Minóy's Art/Life All Stars card and his beloved Radio Shack Reverb.